The Brand Showcase offers a unique opportunity to present key products to leading consumer journalists, influencers and bloggers. It takes place in the show’s media centre housed above Exclusively Electrical. 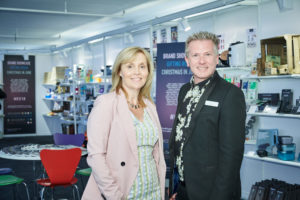 Now in its 3rd year, the Brand Showcase is forecast to have over three times the number of consumer & trade press attend compared to 2018, with a consumer reach of well over 5 million from its influencer attendees alone. Over 300 members of the media have now registered to visit from titles such as Buzzfeed, The Sunday Times, plus leading influencers including ‘This Girl Can Organise’ and lifestyle producers at ITV’s This Morning.

The Brand Showcase is headed up by Richard Watts, who says “We are delighted with the enthusiasm by journalists and influencers to attend the brand showcase. We have reached out to a wide audience over the last few months, inviting more relevant influencers, consumer and broadcast media than ever before. l am overwhelmed by the level of acceptance and enthusiasm for the event, it is incredibly exciting both for us at Exclusively Shows and the industry as a whole.’’

The Brand Showcase is fundamentally an edit of the main show itself. Journalists are invited to see event highlights in one space quickly and effectively – without having to take too much time out of their day. It is proving to be a successful formula. Guided by what they see, the press can then go on to search out exhibitors in the main hall.

“Not only have we seen an increase in media committing to attend the event, but also the number of exhibitors” confirms Watts – “bookings have increased by over 50%”.