The success of an innovative cordless iron by leading SDA brand Morphy Richards has been the catalyst for the launch of a huge multi-channel consumer media campaign.

The easyCharge 360, which was launched in August 2019, was the first cordless iron on the market to offer 360-degree docking – allowing easy docking in any direction – and has beaten all sales projections to become Morphy Richards’ best-selling iron this year.

The easyCharge 360 uses Strix technology – more commonly used on cordless kettles – and its powerful 2400-watt base enables the appliance to re-heat in less than 25 seconds and maintain maximum temperature and steam output.

The temperature-controlled steam function means that when the user changes the temperature of the iron, the steam rate automatically adjusts to give maximum steam output. Other key features include 30g/min of continuous steam, a powerful 130g steam boost to help with the removal of stubborn creases, a self-clean function, automatic shut off and the ability to use the iron vertically on hanging garments. 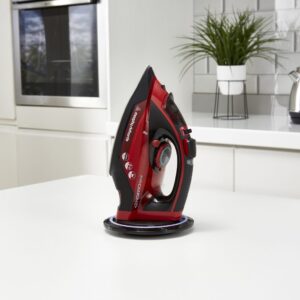 To secure and build on its bestseller status, Morphy has launched a major new multi-channel consumer media campaign which comprises TV, print and digital and social media. The campaign will run until October and includes high profile slots on ITV’s Good Morning Britain, Channel 5, Sky 1, Sky Atlantic and More4.  The campaign will initially focus on the easyCharge 360, with other key Morphy products being promoted later in the year.

Rebecca Allen, Marketing Manager at Morphy Richards, said: “This product has been a resounding success and has been well received across the board. Consumers have really recognised the benefits of the 360 docking and short reheat times. Our recent research has shown that consumers are looking for a brand they can rely on that delivers outstanding results and the technology we have applied to this product helps us achieve that.

“The media campaign is a significant investment for us and demonstrates our commitment to the category and our faith in this product.”