Designer cooker hoods brand AIRUNO has expanded its product range with the launch of its first new island cooker hood in more than a year.

One of AIRUNO’s most powerful hoods, the Verdi Island Hood delivers effective recirculation extraction at a maximum rate of 765 m3/h, making it suitable for use even in particularly large kitchens, as well as eliminating the need to install ducting to vent fumes outside.

Available in widths of 90cm and 120cm, the eye-catching Verdi is an anthracite and black glass hood which features an energy efficient LED strip light along the length of its underside to provide effective illumination of the cooking area below. 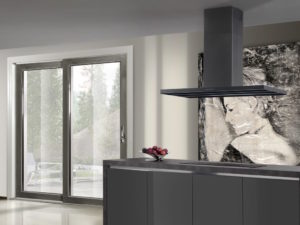 Designed to hang from the ceiling above island units, the Verdi has a noise level of just 47 dB – quieter than the volume of an average conversation. It boasts an A energy rating, the most efficient rating possible, and four speed settings which are operated via the hood’s soft touch control panel.

Chairman of AIRUNO, Geoff Baker, said: “While demand for discreet extraction has grown in recent years, the market for traditional appliances, such as island hoods, has remained buoyant. We’re sure the elegant Verdi will prove popular among consumers and designers who want a hood that acts as a focal point without overwhelming the rest of their kitchen.

“With environmental awareness at an all-time high among consumers, we’re also delighted to help them minimise their energy consumption by offering a hood which is as energy efficient as anything currently available.”